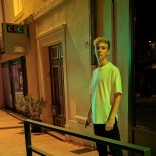 Palm Angels have added its hyped logo to a pair of Clarks desert boots. The iconic boots which were invented by the British shoemakers have played an important role in fashion history, being inspired by British army shoes and central in the mod subculture as well being a favourite of 1970s rudeboys in Jamaica.

Taking all of that history and extending it with this collaboration, it marks the 70th anniversary of the boot. Palm Angels have modified black and sand variations of the shoe and added bold logo details along the front.

Get a closer look at the boot below, available to shop now from select retailers.